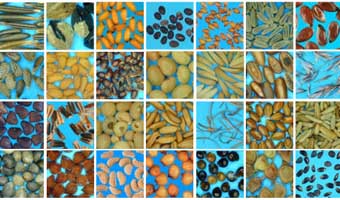 A characteristic of weeds in north west Europe is the seedbank of buried seed that they form in agricultural soil. Each species' seedbank persists in the soil for several years, so that even when they appear to have been eradicated, they  come back. While some seeds are repeatedly brought into the seedbank by stock animals and machines, and others are carried on the wind, most of the seedbank is replenished by germination and seeding of what's already there. Because of this, fields rarely have the same weed species in their seedbank. The commonest might be the same but the rarer ones tend to be different, possibly due to past events that have allowed certain types to multiply.

The seeds take many different forms, as the photograph above right shows. Each seed is a small packet of food, high in energy and nutrients, that nourishes small mammals, birds, insects, fungi, bacteria, nematodes and other soil organisms. Each year these creatures take about half the seedbank. Yes half! The seedbank suffers a high rate of decline. You would think that if farming was very efficient at controlling weeds, if it stopped weeds emerging from the seedbank and producing new seed, the seedbank would disappear. And it would ... but weed control is never absolute - at least some species make it through in most years and in some years many species complete their life cycle often unseen under the crop canopy.